The second age of small

Micro businesses are often painted as inefficient, lightweight and an overall drain on our economy. But our research finds that many are in fact thriving, boosted by new technologies, changing consumer habits and a pro-business policy agenda. So are we at the dawn of a ‘second age of small’?

The micro business community is booming. Defined as firms with 0-9 employees, there are now 5 million such businesses in the UK, up from 3.5 million in 2000. In contrast, the populations of all other sized firms have either increased only marginally or fallen in number. The RSA has described this phenomenon as the ‘second age of small’, in reference to the fact that cottage industries were once the norm in pre-industrial Britain.

But is this a good thing for the UK? While some view the growth as a sign of an entrepreneurial renaissance, others consider it to be a bad omen and something to push back against. The developmental economist Simon Kuznets long ago argued that as economies became more prosperous small businesses would diminish and rates of self-employment would fall.

Our report concludes that Kuznets and his academic successors were wrong in their unfavourable appraisal of small firms. While micro businesses may be on average less productive than large firms, they fare considerably better in some of the fastest growing industries, particularly those bound up in relationships such as health, education and social work.

On innovation, too, micro businesses perform better than some believe. They may invest less in conventional R&D, but evidence suggests they are well placed to engage in ‘intangible’ innovation – the creation of new concepts, experiences and designs – that is vital to industries like music, food and media.

Micro businesses also have an important role to play in job creation. While their employees may be lower paid and have fewer protections than workers in large firms, government data clearly shows they are one of the most satisfied groups in the labour market. They score particularly high on measures of autonomy, involvement in decision-making, loyalty to the organisation and relations with management.

The take home message of the report is that the micro businesses boom should be lauded rather than lamented. Indeed, economists and policymakers should pay more attention to what is happening at the larger end of the economic spectrum where oligopolies have amassed considerable market power. From energy to telecoms to cinema screens, there are few sectors that do not show a worrying degree of consolidation.

The task for the government and others is to find the ideal level of concentration – the goldilocks economy – that allows for both big and small businesses to flourish for the benefit of consumers, workers and entrepreneurs alike. While policymakers have in the past called for a rebalancing of the economy in terms of sectors, this report finishes by calling for a rebalancing in terms of market concentration. 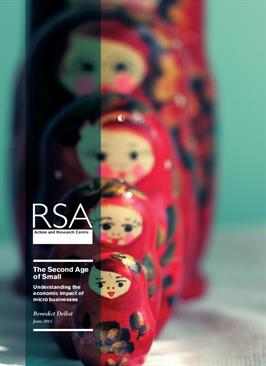