The introduction of the English Baccalaureate to secondary schools this year is set to have a number of profound effects on the shape of the curriculum. The emphasis on the traditional academic territory of maths, English, science, humanities and languages inevitably impacts on the status of other subjects – as perceived by heads, teachers, pupils and parents. One of the losers is certain to be Design and Technology – compulsory for two decades, now optional only post-14, and losing time and resources to the core E-Bac subjects.

Many involved in ‘DT’ fear a return to the bad old days of the subject’s roots in woodwork, metalwork, needlework, home economics and technical drawing – which were in many schools regarded at best as a pre-apprenticeship grounding in handicrafts, and at worst as the ‘sink’ subjects in schools with academic pretensions, providing a half-hearted vocational alternative to pupils based in remote ‘tech blocks’.

How can this be, given the 20-year opportunity the new subject of design and technology has had to establish itself? And given the apparent alignment of the subject with both the STEM (Science, Technology, Engineering, Maths) agenda and with design – a process regarded by both New Labour and Coalition governments as vital to building a competitive, knowledge-based economy based on ideas and innovation? 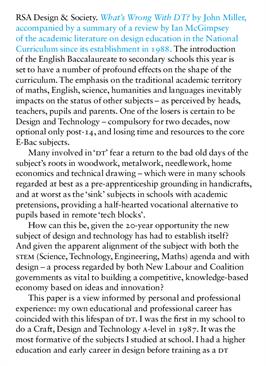