When the government launched its ‘rehabilitation revolution’ most people welcomed its emphasis on getting prisoners into employment, even where there were worries about whether the resources and systems were in place to address the wider issues facing many prisoners.

When the Transitions idea was being developed, we worried about the combination of privatisation and work; not wanting to end up more like the US, where many prisoners work for very little and companies make huge returns. Without often succeeding in getting prisoners resettled or in to work on release. Was there a more ethical model that was not profit driven and designed to meet offenders’ wider needs and help make them employable?

This paper was commissioned by the RSA to inform the development of a major new practical project it is considering. It aims to set out a vision for RSA Transitions, a new model of community prison and “through the gate” provision which would be designed, built and managed around a culture of learning and social enterprise with the aim of rehabilitating people through increasing their capacity to work and resettle.

This is a major and controversial potential innovation. The RSA has been keen to stage its development and to engage policymakers, practitioners and RSA Fellows. The RSA is very grateful to all those who have taken part; this paper reflects our latest thinking based on this engagement and is based on some informed assumptions made which represent a starting point for detailed further research and development. Here we aim to set out the context in which the RSA’s thinking is taking place, the principles underpinning the idea and some of the key characteristics of the proposed new institution.

• Seeks to provide a new model of custody and rehabilitation services based on a single site, and working with between 500 and 700 people (in custody and transition) at any one time. It would build on the best practice already taking place within the criminal justice system and social enterprises.

• Would pay prisoners to work in social enterprises while in custody. This would continue through the gate in a Transition Park with the aim of normalising work, addressing resettlement needs and securing employment in the community. Salaries would make a contribution towards reparation to victims, individual savings towards resettlement and, potentially, running costs. There would also be an element of staff and service user ownership linked to performance and rehabilitation.

• Would be run as a social business under the RSA brand with a central holding company, working with different social enterprises within a frame w ork agreement. This framework will be underpinned by shared values and objectives including embedding consistent and rigorous evaluation methods designed to identify what works to reduce reoffending and its drivers.

• Would involve employers, service users, local services and community members in its design, delivery, learning and skills content and governance.

• Would be driven by ethics, security and environmental and economic sustainability and aims to influence the way in which other services work and provide a model for future prison and through the gate provision 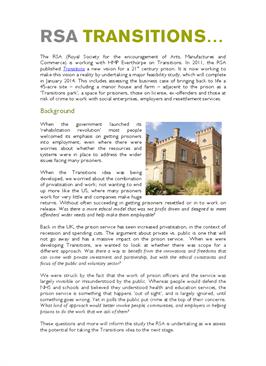