The North's digital economy - 7 key takeaways from our report

From the launch of the C4DI co-working space in Hull, to the expansion of Newcastle’s Ignite accelerator programme, through to the continued success of Liverpool’s Baltic Triangle hub, the North is fast developing a name for itself as the new kid on the digital block. But what does the future hold for the region’s fast-growing tech clusters?

In partnership with Tech North and the Impact Hub, this week the RSA launches a new report that looks at the make-up, importance and potential of the North’s emerging ‘Digital Powerhouse’.

Our central argument is that the region’s tech clusters have it within their gift to compete with the world’s best tech hubs – but not necessarily by following their lead. We suggest that the North can pioneer a different way of ‘doing tech’, with clusters that are more anchored in their surrounding communities and with tech firms that are more responsive to the needs of nearby industries and public services. As our report reveals, the scope for win-win collaborations in the North is vast.

Here we look at the study’s 7 key findings.

In recent years, the North has witnessed a significant increase in the number of co-working spaces, accelerators, meet-up groups, community events and digital festivals. According to a report published earlier this year by Tech City UK, over 280,000 people are now employed in the North’s digital economy, the equivalent to 1 in 20 of the region’s workforce. Tech businesses in the region produce £9.9 billion in GVA, and the region’s largest tech cluster (outside of London) is in Manchester. These figures show that the North’s digital economy merits the increasing attention it has been given.

#2 – Tech is key to boosting employment, wages and productivity

The digital economy is a source of prosperity for the North. Our analysis shows that digital jobs in the region are increasing at ten times the rate of jobs in non-digital sectors, and that the productivity of digital workers is 53 percent higher than that of non-digital workers. This in turn has fed into higher earnings, with digital workers in the North being paid an average of £16 per hour compared with £10 per hour for their counterparts elsewhere in the economy. If there was ever a sector that could make real the aspirations for a private sector-led and innovation-focused Northern Powerhouse, the digital economy is it. 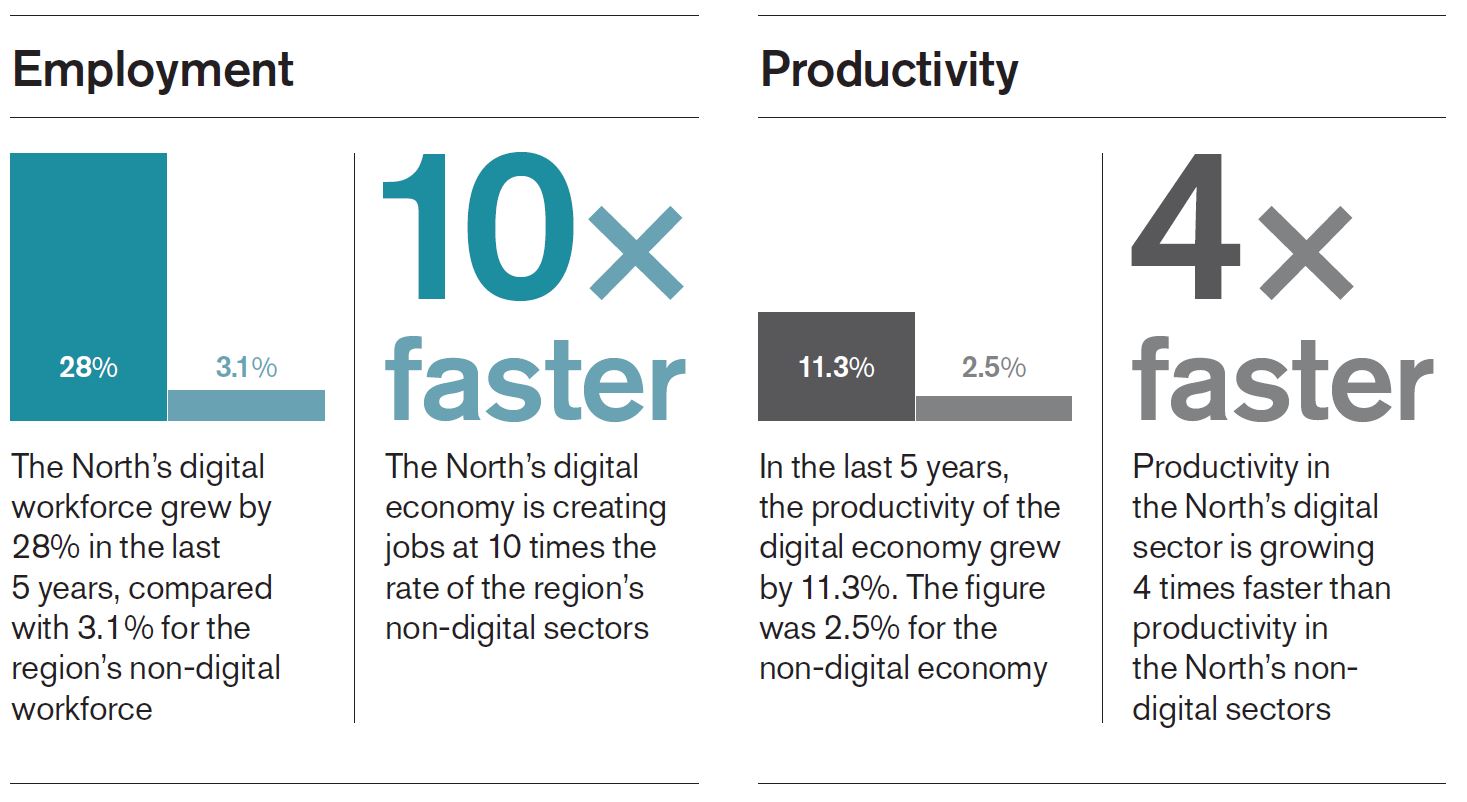 #3 – The North is making particular headway in the Internet of Things, digital advertising, gaming and several other tech scenes

Northern tech clusters have broken through into a number of fast-growing digital markets. Manchester has developed a world-class digital marketing hub, Newcastle is home to a budding community of social network businesses, and Leeds is building up its expertise in HealthTech. Specialisation of this kind has led some of the cities to adopt new monikers, such as Liverpool (‘sensor city’) and Sheffield (‘maker city’). The graph below shows the over and under-representation of different digital subsectors based on what would be expected give the prevalence of these subsectors nationwide.

#4 – Efforts to boost the North’s digital economy have tended to overlook a crucial factor: market opportunities

Talent, finance, culture and infrastructure are four bedrocks of a digital economy, and they have rightly taken centre stage in attempts to build the North’s Digital Powerhouse. But our report argues we should pay as much attention to a fifth creative condition: market opportunities. By this we mean the ability of tech businesses to win paying clients, make deals and break into public and private sector supply chains. Stimulating demand for the products of tech firms is one way to help the North’s tech clusters reach their full potential. We estimate that a ‘fully charged’ Digital Powerhouse is worth an extra £5.7 billion in GVA to the region and 9,700 more tech founders.

Whether it is an EdTech company working with local schools to bring e-learning into the classroom, or an Internet of Things firm helping a city authority digitise its transport system, the scope for win-win partnerships in the North is considerable. Our report highlights several examples of local collaboration in action. In manufacturing, Manchester-based 2M Automation worked with the Nissan car plant in Sunderland to transform operations on its factory floor, while in health, Yorkshire-based Immedicare created a telecare service to link care homes in Airedale with clinicians in the nearby hospital. As more industries succumb to the forces of ‘digitisation’, partnerships like these will become increasingly important. 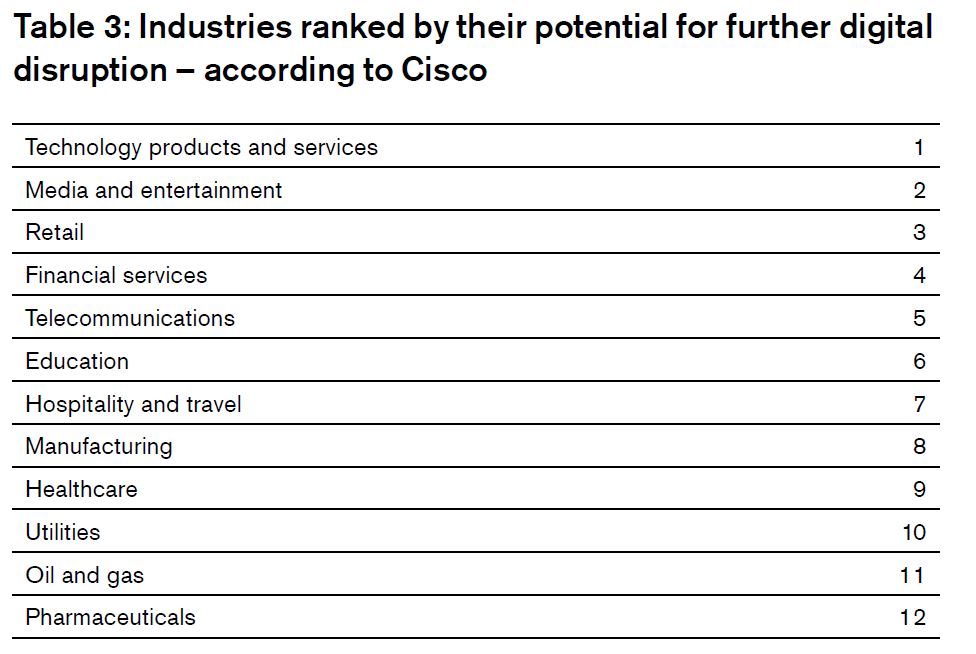 Collaborative innovation should be underpinned by the North’s wealth of knowledge assets. The region has 29 universities, 7 of which are in the Russell Group and 3 of which rank in the world’s top 100 higher education institutions. The North is also home to several science parks, 600 large corporates and a number of thriving tech founder communities. All of these hold insights and intelligence that may be valuable to tech businesses. Leeds’s growing HealthTech scene is a good example of how knowledge assets can be meshed with the tech community. Alongside multiple HealthTech businesses, the city region has a Digital Health Enterprise Zone, two major hospitals, an academic health science network, the NHS Data Spine and a number of large health companies like EMIS and TPP.

While the world’s tech clusters undoubtedly bring significant benefits to their host cities, they also have a habit of operating in siloes. Silicon Valley is more likely to be known for its billion dollar IPOs, celebrity founders and cult brand followings than it is for helping to transform nearby public services or bring San Francisco into the digital age. Our ideas for collaboration in the North are part of a wider ambition for the region to do tech differently. The Digital Powerhouse has the potential to set a new standard for tech clusters – one where it is the norm to be anchored in, responsive to, and appreciative of host cities.

We finish the report with a number of recommendations that would further strengthen the North’s budding tech clusters – from introducing tech taster vouchers, to championing the tech co-operative model, to kick-starting corporate-backed accelerators. 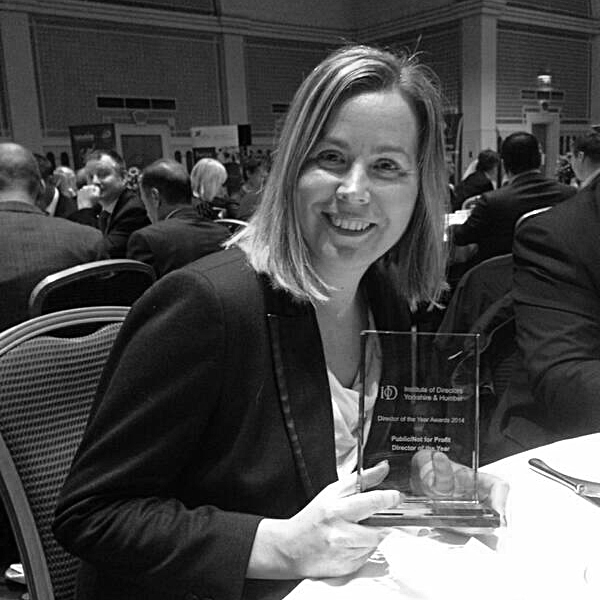 Meet the tech developers with a strong conscience who are using digital devices to change our world for the better.

By the end of 2012, it is predicted that networked devices will account for a fifth of internet traffic, logging and processing in various ways the ‘behaviour’ of the street. Barbara Anderson FRSA argues we all share a respons ...

Blog: Co-working, coffee and social enterprise at the Home of ...