People, Public Services, Place and Power: a new prospectus for research and action

The RSA’s Public Services and Communities team, part of the Action and Research Centre, has launched a new ‘prospectus’ setting out its future programme of work.

Since I started working at the RSA in May this year, I have made it my mission to go out and listen to the ideas and concerns of its 29,000 fellows who are distributed quite literally across the whole globe.

No other think tank has such a broad base of policy wonks. No other ‘do-tank’ has such a prolific network of innovators. And it seemed natural, for an organisation so deeply committed to democratic reform and community agency, to put our principles into practice and attempt to co-create the strategy we want to guide our work.

Over the course of hundreds of conversations and Fellowship meetings, 8 participatory workshops right across the UK, and a number of themed webinars involving fellows from overseas, it has been fascinating to crowdsource an agenda for change. 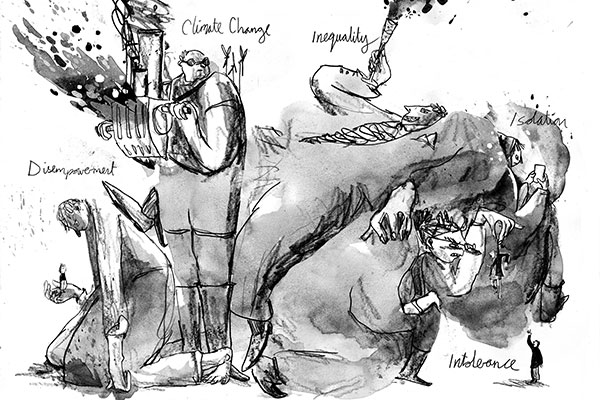 We shaped our conversations around the idea that just as William Beveridge, back in the 1940s, constructed his ideas for the 20th century welfare state around the notion of tackling Britain’s Giant evils. In exploring the relationship between state and society in the 21st century, so we asked people about the Giants looming over Britain today. And it was remarkable just how much consistency there was in people’s responses.

Although the language varied from place to place and person to person, it was fairly easy to identify 5 clear themes: inequality, intolerance, isolation, disempowerment and climate change. And what was perhaps most striking of all was the prevalence of one word above all others: inequality.

We were so struck by this, we decided to carry out a public poll and we commissioned Populus to carry out a survey of over 2,000 people to test what they felt to be the biggest challenges facing the nation. We gave them 10 options and asked them to select three and the results were surprisingly similar. The top answer, chosen by 49% of all respondents, was inequality. This was very closely followed by our ageing society. And climate change came in at 35% too - a particular concern for younger people. Given our current context it is also interesting to discover that only 33% thought Brexit and international relations were of particular concern. 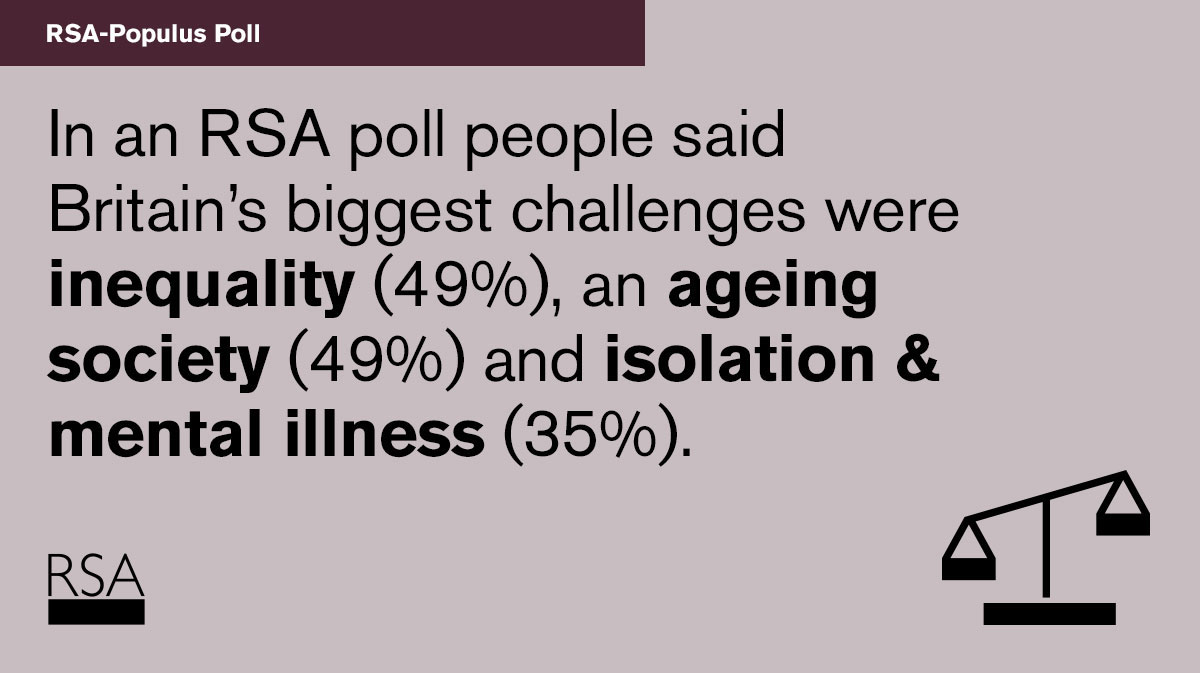 We also asked people if they were prepared to pay higher taxes to address some of these challenges and remarkably 41% said they would, compared with only 14% who said they wouldn’t. The rest weren’t sure. Within this there are some fascinating nuances. Young people were the least likely to back higher taxation with only 30% of 25-34 year-olds and 33% of 18-24 year-olds supporting higher tax and increased public spending compared with 54% of those over 65. There is clearly some enlightened self-interest at play here. And if patterns of public expenditure persist, any increases in public expenditure risk widening the inequalities they might be intended to reduce.

While health and social care spending is clearly a national priority, if it continues to consume the lion’s share of public spending – and any public spending increases – then young people will remain wary. Furthermore, our polling shows that young people seem to lean away from fiscal redistribution as the main means of achieving social justice in favour of volunteer-led social action and equal opportunities.

Our listening exercises and polling make two things clear: First, public service transformation must break down silos and focus more effectively on tackling the social and economic determinants of ill health and social isolation, not least in reducing economic insecurity. And second, we need a more sophisticated account of the relationship between ‘welfare’ - the role of the state – individual opportunity and communal social action.

To this end, we have committed ourselves to a new ‘change aim’:

Our vision is of a society where citizens, businesses and governments work together, in policy and in practice, to tackle inequalities of income and wealth, of health and well-being and of place, power and exclusion: a new social settlement that reconciles welfare with opportunity and social action.

Join the conversation (19th November - 10th December) a series of powerful conversations looking at the change needed in our democracy, education and economy

We set out a range of new ideas for research and action, set out under 4 themes: people, public services, power and place. And we are wanting to energise a number of critical policy debates about how much tax we should be paying for our public services; about how to drive a devolution revolution; and about bring deliberative democracy into mainstream British politics.

Our more participatory approach to fostering a 21st century enlightenment doesn’t stop here. We are determined to build on the ideas and activities of Fellows as we seek to tackle the Giants that loom large over contemporary Britain and whose equivalents can be found in almost every nation of the world. And so we are inviting as many people as we can to get involved with our programme of work whether via Twitter, via collaborative action or via sponsoring our research programme. Do drop us a line and accept our invitation to be partners in change.

Ken Loach’s new film shows that social care workers still care, even when the system doesn’t. Have we lost sight of the difference between delivering a package and delivering care?