Economic growth needs to be re-kindled – but in a more sustainable form that carries public confidence and delivers fairer returns. These are the two big policy challenges of our time. Yet they are not being considered together, and risk pulling in conflicting directions.

Arguments about ‘responsible capitalism’ and public service reform are live, ongoing debates but they have been made in different places, addressing different audiences and needs. These agendas could diverge unless they are brought together as part of a coherent narrative. In this report we argue that the concept of social productivity should frame the process.

The Coalition government is rolling out a programme of public service reform built on the policy narratives of deficit reduction, open public services and the Big Society. Austerity dominates this context. The state is pulling back funding from services and reducing its direct role in provision. Citizens and civil society organisations are being asked to step up and take more responsibility. In simple terms, the prescription has been less state, more citizen.

But what does that imply for business? Until recently, its role within the new settlement has received insufficient attention, and the accounts offered have been polarising. On the one hand, business has loomed as a threat to traditional public services and social value. On the other hand, business has been lauded for efficiency and urged to grow the country back to economic prosperity.

The reality on the ground is one of inter-dependence and shared agendas. Local Enterprise Partnerships (LEPs) – jointly led by local government and local business – are not constructed to get government ‘out of the way’, but precisely to bring government, business and other important civic actors together to generate growth. The story they tell is that the state, public services and local economic growth can be mutually reinforcing.

Businesses, public services and civil society are themselves in a process of change. Just as the state is redefining its role and function, so too is business – responding to new arguments about sustainable value creation, and growing external pressure. The public is becoming more critical of the negative social impacts associated with business, more concerned with the environmental sustainability of its underlying model, and less accepting of the way it distributes rewards. The politics of high pay and ‘predatory’ or ‘crony’ capitalism –addressed in different ways by government and opposition – illustrate both the thirst for a new way of looking at the role of business, and the fact that this notion is being taken seriously in Whitehall. 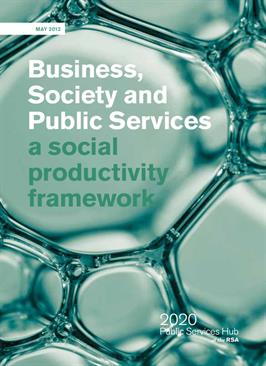