From carpenters to lawyers, and from beauty therapists to IT consultants, there are now close to 5 million people in the UK who count themselves as self-employed.

The evidence is overwhelmingly clear that most choose this path to have a better life – to pursue a passion, to break free from bureaucracy, and to have more flexibility to look after loved ones. The picture that is often portrayed of a downbeat army of workers forced into self-employment under duress is a far cry from reality.

But the self-employed do face unique challenges – none more so than in preparing for later life. Our new report reveals that barely 1 in 5 of the self-employed are currently contributing to a personal pension, and most of these tend to put away too little and at too late an age.

The reasons for this savings shortfall are myriad: people who work for themselves earn less, have no employer to auto-enrol them or top up their pension, and unsurprisingly are reluctant to lock away cash they may need in the event of a business emergency or bout of ill health.

In this report, produced in partnership with Etsy, we aim to look afresh at how this problem might be tackled. In doing so, we look not only at how to encourage the self-employed to begin saving, but at how they might be supported to save enough, as well as how they might access those savings responsibly during both during and after retirement.

Among our recommendations are to clarify the stance of the Lifetime ISA, pursue auto enrolment via accountancy software providers, and establish a Pensions Passport so people can carry over pensions from employment.

More significantly, we propose replacing the current multi-tiered tax relief system with a flat-rate model of 30 percent. This means that everyone – regardless of how much they earn – would only need to deposit 70p for every £1 they wish to add to a pension. We estimate this reform would leave 75% of pension savers better off – including the low income self-employed.

This report was produced in partnership with Etsy

The ideas and analysis presented in this paper were informed by a series of discussions with NEST Insight, as well as by research commissioned by NEST Insight and delivered by BritainThinks.

Read Nest Insight’s report on pensions for the self-employed. 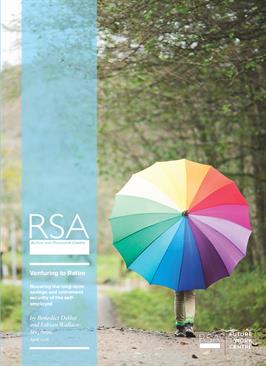