Employment rates have again reached record heights. But it seems most of the jobs growth in the last year has been driven by a surge in insecure forms of work. Is this just a blip, or a sign of things to come?

Most of the jobs growth in the last decade has been in steady, secure roles. According to the Labour Force Survey, full-time permanent employment has grown by 2.5 million since 2010, accounting for more than two thirds of all jobs growth. Zero-hours contracts (ZHCs) are new to the scene but have been just as a significant contributor as self-employment. ZHCs have risen from less than 200,000 to just under a million; self-employment has risen from 4 to 5 million.

This week was one for breaking records: it was not only employment rates that reached record highs, but also the number of workers on ZHCs and in self-employment.

During the recession and in the years just after, self-employment growth closely matched weak growth in the number of employees. In most years when employee growth suffered a decline, more people continued to move into self-employment. Since 2013 we have seen much healthier growth in numbers of employees.

However, the most recent labour market statistics reveal that things may be taking a turn for the worse, with a rise in insecure work. 2019 was the first year since the end of the recession that self-employment growth surpassed employment growth. The only other year where ZHCs growth came this close to employee growth was 2013, which is often explained on the basis that people didn’t really know what ZHCs were before this point, so there was likely to have been some underreporting.

ZHCs are a subset of employees, which complicates this analysis a little. It’s not the case that all new employee jobs are ZHCs: stats show that around half of the growth in ZHCs has been among people who have been with their employer for longer than one year. 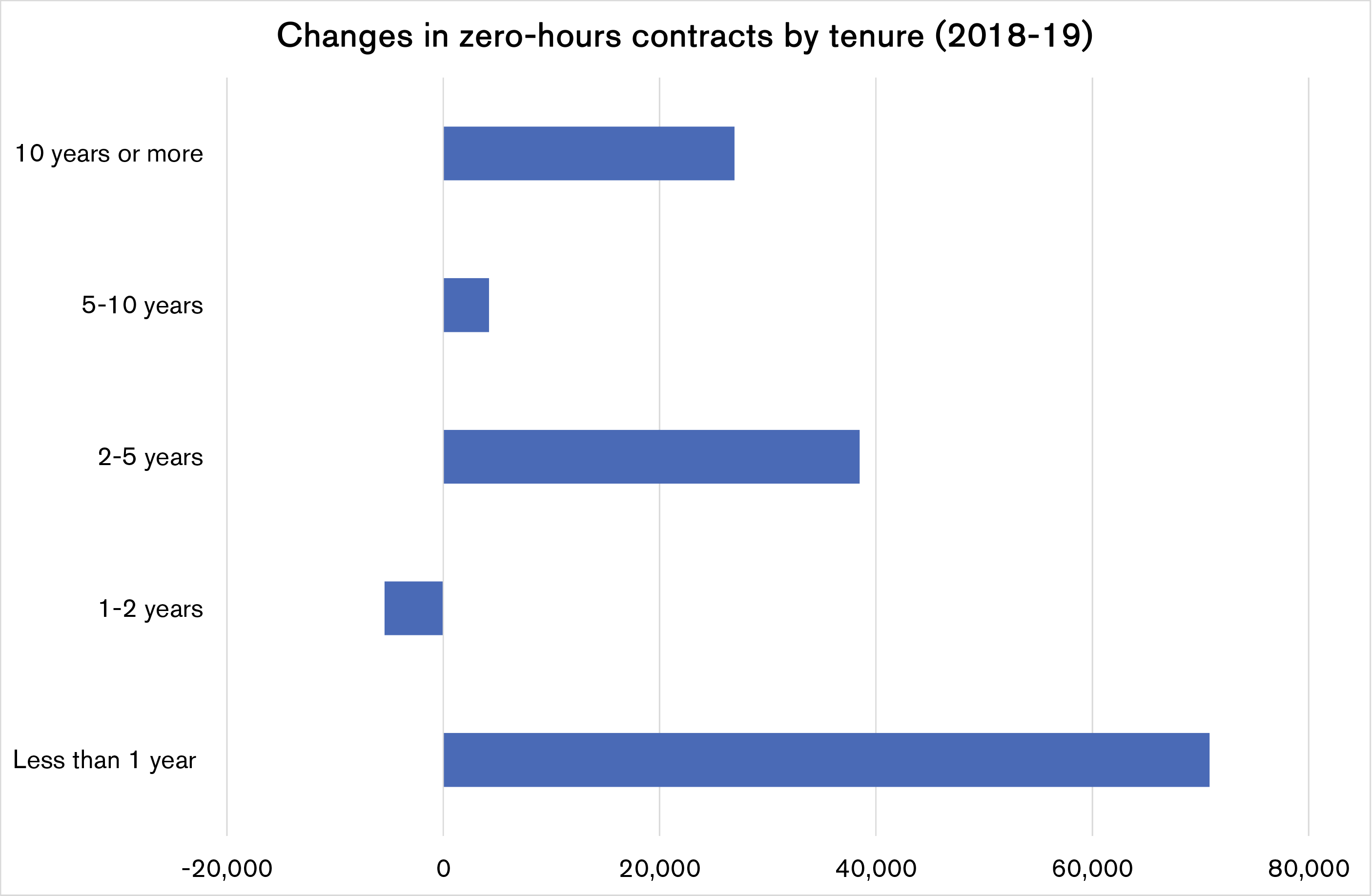 The last time we saw similar patterns in the statistics was October to December 2015-2016, which was just after the Brexit vote. We hear a lot in the news about Brexit impacting the confidence of businesses, with companies put their hiring plans on hold and firms even losing contracts because of the uncertainty over Britain’s future.

Brexit may also be impacting management practices, with businesses turning to more flexible employment arrangements such as ZHCs in order to weather the uncertainty. Of course, there is a lag in statistics – and we will have to wait and see if we see a ‘Boris bounce’ in the coming months as negotiations develop. But as RSA Future Work Centre colleagues Alan Lockey and Jack Layton have recently pointed out, labour regulations are also very much up for grabs. Diverging from EU regulations could lead to further spurts of insecure contracts.

Some of these changes may be cyclical; some of them structural. One explanation for the recent resurgence of self-employment could be that the gig economy is finally starting to show up in the official statistics.

Although piecework ‘gigs’ are nothing new, the rise of online platforms able to match tasks to workers on demand is a recent development, with Uber only launching in the UK in 2012. Gig workers are not just Deliveroo riders and Uber drivers, they are also freelance coders and graphic designers using platforms like Upwork.

Gig work is still not captured well by official statistics. One reason for this could be that most gig workers are not using platforms as their primary source of work. A 2017 RSA / Ipsos MORI survey estimated that 1.1 million people were working in the gig economy, 62 percent of whom were also either self-employed or employees and using platforms to top-up their income.

More recent research points to a rapid expansion. A 2018 study conducted by NatCen for the Department for Business, Energy and Industrial Strategy indicated that 2.8 million people had used gig platforms to find work in the previous 12 months. In June 2019, the Trade Union Congress, University of Hertfordshire and Ipsos MORI found that nearly one in 10 workers use these platforms at least once a week.

Two-way flexibility for all

The Taylor Review described ‘one-sided flexibility’ as when employers ‘seek to transfer all risk onto the shoulders of workers in ways which make people more insecure and make their lives harder to manage’. Genuine two-way flexibility, on the other hand, enables people to work the way they want, when they want, across their working life.

Recent RSA research has shown that one-sided flexibility is not only a problem for workers in ‘atypical’ forms of employment such as ZHCs: as many as 17 percent of typical employees experience problems with income volatility. Many of these workers may be part time and in arrangements where their contract does guarantee some hours, but they often work many more. For example, individuals might be contracted to work seven hours per week but regularly work 20 hours. A recent report by the Low Pay Commission refers to these as ‘short-hours contracts’ and notes that there is a key evidence gap in terms of understanding their prevalence.

Banning ZHCs (as several unions have called for) may therefore do little to help workers – but there are other ways to ensure that they get more guaranteed working hours. One of the Taylor Review recommendations for tackling ‘one-sided flexibility’ was a right to request a contract that reflects your normal working hours. The Low Pay Commission has since argued that a stronger ‘right to switch’ is necessary, since many workers are worried about employer retaliation so are unlikely to raise a request. The burden should therefore be on employers to justify any refusals according to clearly defined conditions, such as the reference period for determining normal working hours.

If insecure work continues to become a mainstay of the economy, we will need to boost the rights of these workers – to ensure two-way flexibility for all.