A new machine age beckons and we are not remotely ready

Another year, another string of technological breakthroughs.

DeepMind’s latest algorithms can detect 50 types of eye disease as accurately as trained doctors. Amazon recently opened several cashier-less grocery stores in the US, with rumours that they will shortly arrive on the UK’s shores. China, meanwhile, just debuted the world’s first simulated news anchor, powered by artificial intelligence.

True, the impact of some of these technologies is greatly exaggerated. But you don’t need to be a tech evangelist to acknowledge that new kinds of machines are transforming our economy – and that includes for workers.

Forget talk of mass automation. Unemployment is at a 40-year low and declining further still. Instead workplaces are being altered in more subtle ways. Robots are doing away with some tasks but creating others. Algorithms are facilitating surveillance, recruitment and scheduling. E-commerce platforms are shifting jobs from the high street to warehouses. AI is powering the growth of gig platforms.

The question is how to respond. The message from some is to go back to what we know best. Ban the use of surveillance in warehouses. Slap a tax on the purchase of robots. Outlaw the likes of Uber and Deliveroo. Throw money at higher education in the hope that young graduates will find jobs in prosperous high-tech industries.

Yet these measures are at best kicking the can down the road and at worst sabotaging our labour market. What is the logic in taxing robots if it would mean less business investment? What would be gained from outlawing gig platforms other than depriving thousands from job opportunities? How would splurging more on HE help the millions entering low-skilled occupations?

We can do better than crude policies that take a sledgehammer to crack a nut.

In our new essay series on a 21st Century Enlightenment, the RSA is calling for a reboot of our social contract – that web of rights and responsibilities that determines what workers should be entitled to and who should meet these needs. 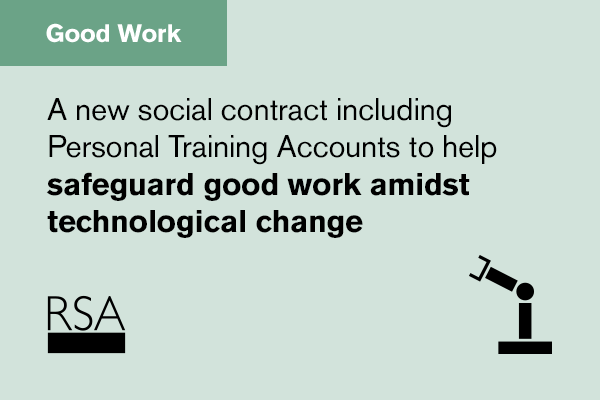 Experimenting with radical ideas like a Universal Basic Income is of course part of this. But a modern social contract must reach into every institution and sway every decisionmaker – from policymakers in the Treasury to educators in FE colleges to HR Directors in the UK’s leading companies.

Here’s a taste of what we have in mind:

#1 – Learn to live with modern ways of working – Technology has powered alternative patterns of work. Almost a million people operate in the gig economy, finding bitesize jobs through online platforms and apps, while nearly 5 million count themselves as self-employed. Rather than lament these trends, we need to recognise the attraction of flexibility while making new job types more secure. This means establishing a new deal for the self-employed, which would extend greater protections such as full maternity pay and auto enrolment to a pension. The financial services industry, meanwhile, must step up to the plate with new insurance and banking products that meet the needs of gig workers.

#2 – Put owning on a par with earning – As technology plays a greater role in our economy, so too does ownership become more important as a source of income. Automation will mean more profits falling into the hands of those who own the machines, including technology companies. We must accept that a job on its own will no longer be enough to thrive in a modern economy. Workers will also need to be asset owners. As our colleague Asheem Singh argues, this can mean workers directly having a stake in the organisations they work for, or indirectly receiving dividends from a sovereign wealth fund that invests in capital on their behalf.

#3 – Intervene at every stage of the technology lifecycle – Responses to a new machine age too often centre on tax and welfare reform (e.g. UBI), as though the only way of sharing the spoils of technology are through redistributive measures. Instead we need to think about stewarding technology at every stage in its lifecycle, starting from the very point it is conceived. Responsible investors, for example, should use their power to shape the behaviour of tech companies and the firms that use their machines. Dutch pension investor MN seeks to do just that by advising its investee companies how to automate responsibly.

#4 – Elevate the status of low-skilled work – It has become an article of faith that blue-collar workers will be able to transition into hi-tech jobs in coding, data science and other tech professions. But we are kidding ourselves if we think this is a realistic journey for most workers. Demand for hi-touch jobs in ‘low skilled’ sectors like social care is set to expand significantly. So how can we help them to develop within their roles without necessarily escaping them? One solution is personal learning accounts, which would provide all workers with an annual credit to be spent on a training program of their choosing. Another idea is occupational licensing, which could beef up the status of low skilled work.

#5 – Rein in the superstar firms – Much has been made of the tendency towards ‘winner takes most’ dynamics in the digital economy, with Facebook, Amazon and Google under increasing scrutiny. But owing to the effects of digitisation, superstar firms are beginning to emerge in many sectors, including investment banking (Goldman Sachs) and entertainment (Netflix). Concentrated markets are bad news for workers as it constrains their bargaining power and gives firms too great a political sway on the nature of workforce regulation. The government needs to rein in superstar firms with a more robust competition policy – one more willing to deny unnecessary mergers.

#6 – Look to the grassroots for answers – Responses to a changing world of work do not always lie with the government. Indeed, innovations are emerging around the world to address the challenges that workers face. The RSA Future Work Awards aims to shine a light on them, raise their profile and give them legitimacy in the eyes of potential funders and users. These include FinTech apps that enable freelancers to weather ebbs and flows in their income, and co-operatively owned alternatives to gig economy platforms like Task Rabbit. Trade unions could have a big role to play here too. As well resourced, progressive organisations, it may be their responsibility to experiment with and deploy new technologies that amplify worker voice.

No one knows what technology will ultimately mean for workers. But one thing is for certain: trying to hold back the tide of innovation is a fool’s errand. Forget the temptation to ban and outlaw. Instead push for an acceleration in the adoption of technology, but on terms that work for the many.

The RSA Future Work Centre explores the impacts of new technologies on the world of work, providing insights to prepare today’s workers for tomorrow’s workplace. 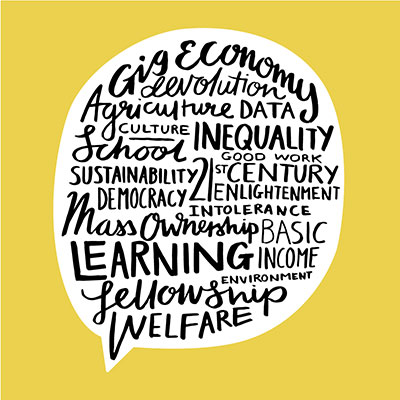